Featured image via @reesesbookclubxhellosunshine, one of my favorite Instagram follows for great book recommendations.

I read/listened to 32 books in 2018. I kicked off the year with a crazy goal to tackle 100 books, and I was off to a strong start! But then I discovered podcasts about halfway through, and spent the majority of the time I’d usually devote to books listening to those instead. (I’ve logged 784 hours on Stitcher, my preferred podcast app, since I joined last April; that’s a whole lotta Bravo snark and bad movie reviews.)

I keep a running list of the all books I finish on my iPhone, because I’m the weirdo that finds it super satisfying to track certain activities and I love any reason to make a good list. Also, when you plow through books like I do, it’s hard to remember the good ones to share with your friends when they ask for recommendations; this way I can refer to the list to quickly see the titles I enjoyed and the ones that were duds. (Do I have some kind of coding system to rank books within my list? I do! Do you still want to be friends after realizing what a nerd I am? Are you still even here? Ha!)

I’m going into 2019 without a specific reading goal in mind, besides being better about sharing what I read here on the blog. I really enjoy the way Grace blogs about books, from her monthly reading lists to her Stripe Book Club, so I’m taking a page from her book — pun intended, thankyouverymuch — and starting a monthly reading roundup of my own. I hope it helps you find a good book or two to dive into, and I’d love to hear your reading recommendations in the comments as well. I also think it’d be fun to do some book swaps, if anyone is interested; I already have one setup with Jayme, the lady behind the beautiful blog, Holly and Flora!

Now onto my January reads!

What are you guys reading this month? If anyone wants to chat about swapping with Nine Perfect Strangers or The Last Time I Lied, let me know in the comments! (US shipping only, please.) 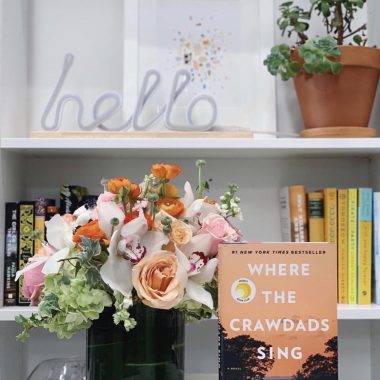